The Yard is just incredible in that there is always a plethora of flying life in all colors crisscrossing and stopping for a quick snack on seed.
In a previous entry I mentioned we had attracted a Field Mouse and should have realized this was a harbinger of things to come. Anna has now counted 5 of these tiny brown creatures that come to the back edge of our deck – in search of groceries that we have been forced to keep centralized at the bird feeder.
Many years ago I used to hunt and fish, but eventually went “cold turkey” when something inside told me “You don’t want to do this anymore.”
So the quandary – we realized the mice could get out of hand and actually purchased a live trap so I could re-locate the mice somewhere else. 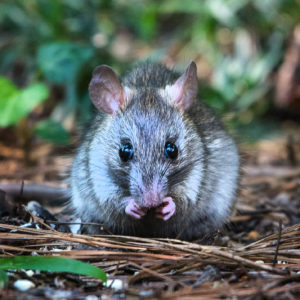 Well this was not a success because two of Anna’s squirrel regulars had to be released and gave her a “Hay, what’s going on here?” attitude for a few days following. So we’re on it and realize we promoted the situation.