A number of years ago I purchased my first boat. The boat was a 13’ fiberglass canoe-like craft with extended sides and flat transom so it was really quite stable. I fitted the boat with a 5hp gas engine and an electric trolling motor that I would have to attach and remove each time I went fishing. I carried the boat on top of an old station wagon and had plenty of room to carry all my gear. The entire rig was incredible because it was light, could move in the shallowest water and permitted me to fish just about anywhere. Getting to the smallest cove where the big fish hide during the heat of the day was easy. Moving up sloughs only a few feet wide took me to pools that probably had not been fished. I really learned the intimacy of pristine spots where the scenery alone made the journey fantastic. My little 5hp motor demanded patience, but if I leaned forward to the sweet spot, proper balance would cause the small boat to plane perfectly and I could coax a few more mph from the craft. The rig was an extension of my being. 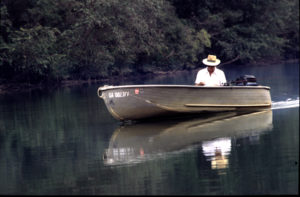 The Boat Show came to Atlanta one fall and I asked my wife if she would like to go, and we went. Well, before we left I was the proud owner of a new 18-foot aluminum bass boat with a 60hp engine, console with all the instrumentation, live well and a perfect trailer for boat launch and recovery. This boat would scream over the lake at about 45mph, had an electric trim that would bring the rig to a perfect plane carrying 3 or 4 people and moved from one area to another in no time. Additionally, as boats go I never had any of the typical boat problems.

I enjoyed the new boat for a few seasons, but as the years passed I found the lakes became smaller and smaller. Speed initially was nice but the shore passed by so quickly I was most times more attentive to safety then enjoying the scenery. Along with speed making the lakes smaller, there were also well known backwater areas where I could no longer go. Being comfortable was nice, but not as exciting. I was a passenger instead of wearing my boat and I missed that. What I had gained in luxury I lost in intimacy. I eventually sold the boat to a man from Virginia, seems he wanted a faster and more comfortable boat.