I just remembered I left a bar of chocolate in my desk and boy can I use a little pick-me-up. Not just any bar of chocolate but one of those smooth milk chocolate slabs that can be broken into chunks to melt in the mouth or be chewed in a way that increases the bitter sweet surface that floods the pallet. Chocolate seems to be one of those things in life that has a place, a moment when its very existence has the potential to quell all fear, redirect all concern and just hit the spot. It was put in the drawer for just a time like this, waiting to serve its purpose, its destiny. Good thinking created this pre-stored cache of wonder intentionally sequestered for the sole purpose of working its magic at the right time and now is the time.

But the thought comes to mind that although this is the right time, it may not in fact be the best time. What if now is but a fleeting moment of weakness and there will be in the not too distant future a moment of greater need? A future moment when the impact of this now un-violated bar would have heightened meaning or perhaps even save the day. And what if someone saw me eating the chocolate? It goes without saying that there would be uninvited begging and one of life’s unwritten laws is never to refuse sharing chocolate. And what if squandering and sharing this wonderful appeaser now left only morsels for the future? What if this is but an impulsive craving that could diminish the medicinal value because the chocolate threshold would be increased? And there is a valid concern that going too far could create a sugar spike that in a few hours would cause one later to nosedive into the abyss. And the abyss for some is to feel faint; while in others it is to become hyper and grouchy. Do I want to accept responsibility for someone going home and kicking the dog and barking at the kids because I shared my wonderful chocolate?

And there is the actual act of sharing. Do I want to go through the guilt of feeling I may not have given a large enough piece. Everyone knows chocolate never breaks where you expect it will. It’s always “oops that’s to much” or “sorry, would you like a larger piece?” And if you try to get around this problem and allow another to break off there own slab do you want to deal with the fingerprints left on the remaining chocolate. Have you ever wondered what someone was doing or where he or she was just before they invaded your moment? What if he’s a nice guy, but not the cleanest cup on the shelf? How do you handle what’s left? Does it retain its original status or is it now tainted?

Well, sharing as an issue can be handled reasonably by simply doing a quick scan of who is in the neighborhood. And if all is clear you can just go ahead and break the seal and dive into that solid hunk of confectionary bliss. But have you ever experienced how chocolate that has been moved around in a desk tends to sliver at the edges. What I mean is that small shards of the delectable delight brake off in the package and seem to fall out when opened and often find their way into the oddest places. Not to mention papers on your desk, between pens and desk implements kept in drawers and of course on your pants and down between your legs. It is amazing how things seem to gravitate down into the crotch area where hours of dutiful sitting have created a warm and hospitable environment for things that like to melt. Have you ever tried to remove a shard of chocolate from a seat or pant fabric when it has begun to melt? You’d swear the Bible story of the seven fishes and seven loaves had been recreated. That shard of chocolate so small when it leapt out of its packaging grows and smears, smears and grows, and all you want is to make it go away.

So there you are, all you wanted was to enjoy a piece of chocolate and now you have to re-copy a report, clean your desk, get some warm water to “de-chocolatize” your chair, and how are you going to explain the brown smears on your tan poplin pants? You just know you are going to be the subject of jokes all afternoon. And the packaging is no longer re-foldable foil; it’s now made of a plastic material that once opened almost demands total consumption because it’s not designed to be resealed. The potential impact of leaving the opened bar in your desk is simply astounding. Not to mention nighttime critters that make their way into desks looking for their midnight snack. Did you ever leave something somewhere and when you returned felt it didn’t look quite the same and wonder if something else had been there? Will the chocolate retain its original status, or again would it be tainted?

Oh what’s all the hubbub about? This is just about a wonderful piece of heaven. But you know I’m reminded of a project I worked on in high school. It was a project that required me to obtain reports from the food and drug administration. Have you ever read some of the reports that list what is found in processed food? As a youngster when we would go to the movies, we always had to have some of those wonderful chocolate covered things. And you know they were so popular that to my surprise I found some of them listed in the reports. The reports almost required a degree in entomology and zoology, what with all the rodent and bug part findings. It just goes to prove that chocolate is universal, what a small world. But this was so many years ago and food processing has made so many strides. Let’s just take for granted that this bar of sweet satisfaction is as perfect as it is meant to be.

So the decision remains: Do I delve in and give my highly evolved chocolate craving taste buds the lead, or do I allow deeper cerebral discourse to control the moment? What the heck, full speed ahead, carpe diem, go for it. Aamazing isn’t it how simple things in life like a bar of chocolate can have such far-reaching implications. 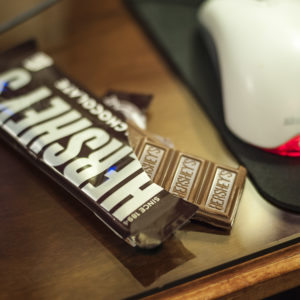