If you are a pilot, you know the air above us is criss-crossed by numbered airways that cannot be seen because they are made up of transmitted radio frequencies displayed on aircraft instruments. If you have seen white contrails of high flying aircraft you will probably see them in the same positions over and over again because they are on established airways in the sky.  Well, in our yard we have determined there are established flyways through the trees and bushes that the birds use and the Masters Of The Flyways are the Cardinals.  We are certain the Cardinals nest in the bushes, because we can hear the chirps of what sounds like nested young during the day.  The Cardinals swoop over our deck almost as if telling us to get out of the way.  Yes, we can almost reach out and grab them, but never would do so.  They also sit on the deck furniture near us, watching us, trusting us and wondering what we are doing there.  There are both males and females – or just a primary pair that are constantly on the go.  There is also a haggard looking female that Anna has named “Grandmother.” The male is bright red and the female is brownish red. 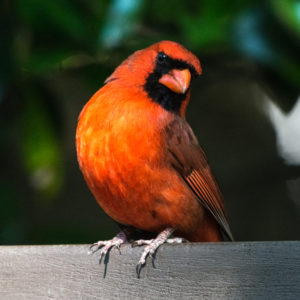