We now have Brown Thrashers in our yard.  There are two that seem to stay together all the time.  Two days ago one of the birds landed on the ground in the yard and began to shake its body into the pine straw and leaf coverage.  The bird laid their for about 4 minutes and then got up and skipped into the bushes near the described spot.  I then saw the other bird in the bushes that seemed almost attentive to the bird in the pine straw.  I told Anna what I saw and she became concerned the bird was hurt, but I could not help feeling the bird was nesting – the two birds hang around in the bushes now. 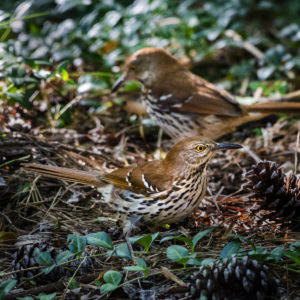 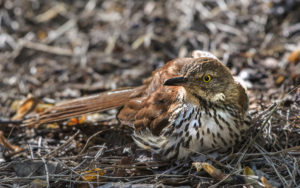