We’ve found that success is great, but one issue leads to another.  We moved the peanuts away from the deck to save the flower beds and it “kinda” worked.  However, we also began to notice the peanuts were disappearing so quickly it made no sense.  Squirrels and birds usually will take a peanut, scamper off/fly off and eat and then maybe come back.  Well Anna decided she had to find out what was going on. This afternoon she sat out and watched the yard after putting out a bunch of new groceries.  After a while out of the back of the yard came not a squirrel, but one of the small chipmunks.  Anna said she sat there and in amazement watched the first chipmunk crawl around and stuff not one but six peanuts in its mouth.  It then scampered off and in a few moments it, or another, came back and did the same thing – again and again.  Seems these little creatures, that are usually very “skittish” have no fear and keep coming back until the squirrels and birds can find nothing left.  They must be running a peanut stand somewhere between the yard fences. 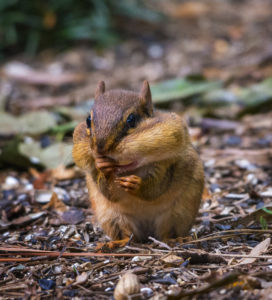