There is another bird that has been around for several weeks that looked initially like the Grosbeak,  However, on close examination the Eastern Towhee’s coloration is different and we can now make the distinction.  What drew Anna to the bird was the attention one bird was continuously giving to a smaller almost all gray bird,  The Eastern Towhee is black on its head and back with white and orange coloring and the gray bird has a hint of brown.  The quandary is that the gray bird will land below the bird feeder and the Eastern Towhee then arrives and picks up seed and actually feeds the gray bird.  It will pick up seed and put it in the beak of the gray bird, over and over.  Initially we thought the gray bird was a baby, hurt like the Thrasher, or we were viewing a true anomaly.  My Son even mentioned seeing the Eastern Towhee dig up a worm and feed it to the other.  This caused us to dig a bit deeper and we found out there is another Towhee called a California Towhee.   This bird matches perfectly the gray and brownish tint coloration. This pretty much res 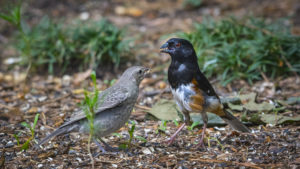 olves the “quandary” regarding the type of gray bird, but not why one attends – in almost human fashion – to the other.