I was only a small child during WW2 and obviously too young to understand what it was like to fear for ones personal safety and family security. But, as a young man in my early twenties, I became a prime candidate for a conflict that was the result of later political and economic failures. By choice, I became a professional soldier from 1966 until 1986 and did go to Vietnam in 1969 and later to the Republic of Korea, but long after protracted hostility was concluded. I am the product of a very effective process that took young men and molded them into groups that were specifically designed to function in harms way. To this day I support a strong military and support the process as essential. The politics that uses our youth is another discussion.

But the question, why a soldier fights? Here I will use an analogy, that of looking backwards through a pair of binoculars. In my experience, the essence of the answer has little to do with all that places a soldier in a combatant situation. When you look through the opposite end of a pair of binoculars the lenses significantly tighten the focus. The focus becomes minuscule but very intense and the bigger picture that was the promoter seems so far away. The macrocosm becomes the microcosm of now. There is no glory or religious fervor, no flag waving, no politics or organization, what matters is mission and the men and women next to you that you depend on for survival and that depend on you for the same. The training system understands human interaction and dependence and very effectively capitalizes on this through the process. Once disillusionment is conquered, all that remains is mission and people. No fanfare, no ceremony, only the moment and those that share the moment with you. When you have experienced the moment you are changed forever and you understand why a soldier fights. 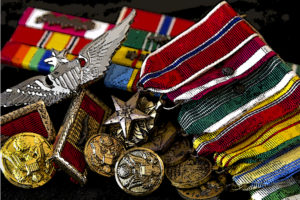